“Nature is so powerful, so strong. Capturing its essence is not easy – your work becomes a dance with light and the weather. It takes you to a place within yourself.” – Annie Leibovitz 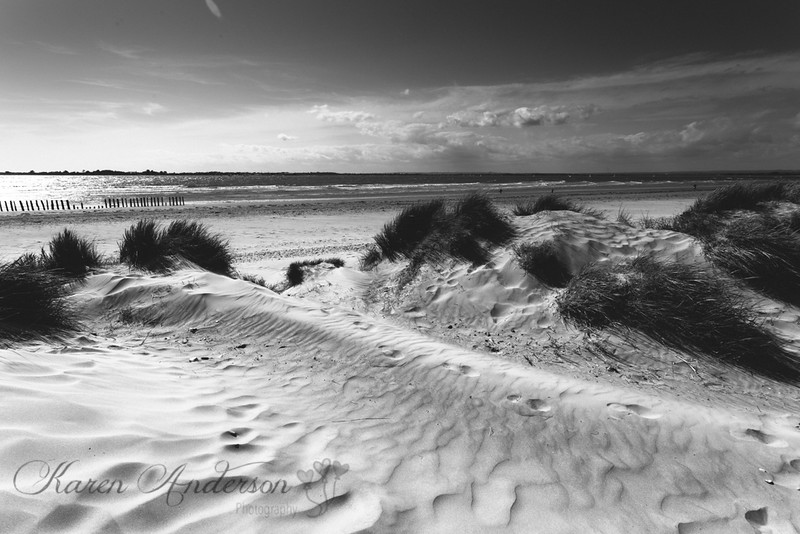 Eeek, I took a little longer off posting than I had intended this time, it was supposed to just be the weekend, but one thing led to another and somehow it is now Wednesday, where do the days go?!? I have been making sure that I spend at least 15 minutes outside each day and will continue to post about each of my 30 days Wild (even if I do end up posting about them in July!). I must say though that so far I feel so much better for it and I am sleeping so much better at night too, it may just be a coincidence, but I do not think so! 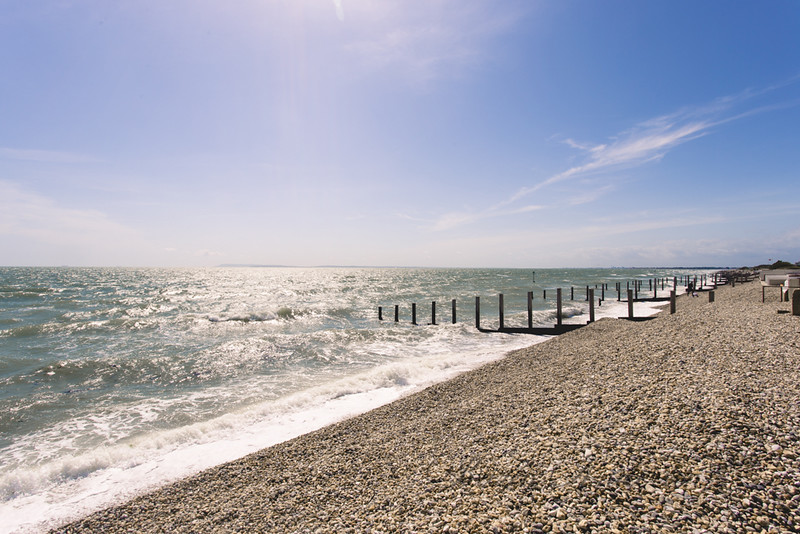 The sun was shining brightly on Saturday morning, our children were both away, my daughter in Normandy and my son camping with Cubs in a clearing in a woodland area in Surrey. We made the most of the good weather and headed out in our convertible, roof down, coast bound to go for a walk. 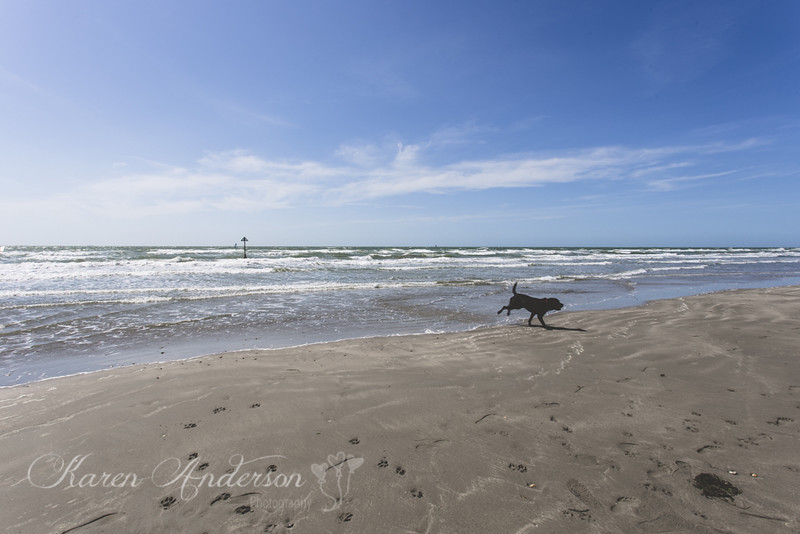 We started in East Wittering parking by the shops then headed to the beach. The tide was relatively high so we could see very little of the sand so our walk started along the public pathway which is a shingle covered footpath that enables a better look at the houses that lie close to the shoreline. These vary in style considerably from ramshackle huts to wonderfully magnificent manor houses and even a stunning thatched cottage. There is a lot of development taking place at the moment, old buildings either being converted or taken down and replaced with modern seaside abodes. For part of the way the large houses with their wonderful gardens and shore are separated by a moat-like ditch with everything from plain wooden walkways to ornate arched bridges crossing the divide. It is quite noticeable that the houses become more ornate and bigger as you walk from East to West.

In some gardens, plants stand like works of art sculpted, shaped and bent by the constant onshore wind and while in others driftwood has been collected and then form makeshift sculptures that decorate the gardens amongst the spare plant life 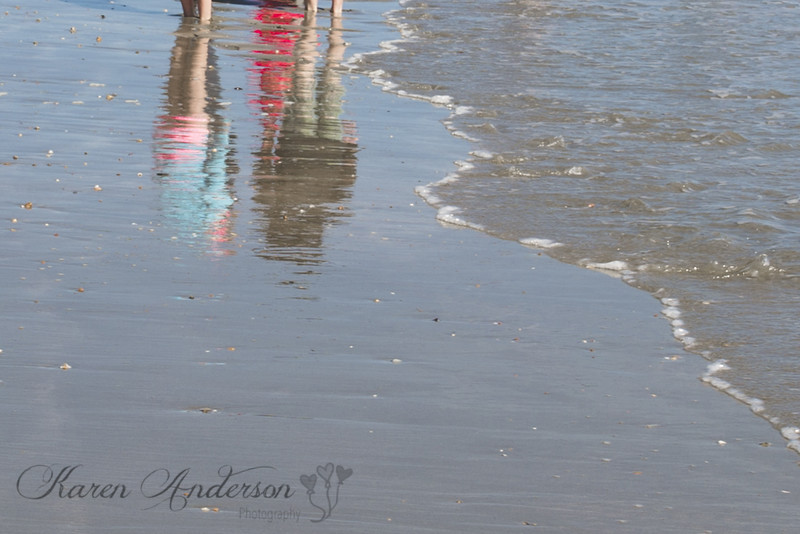 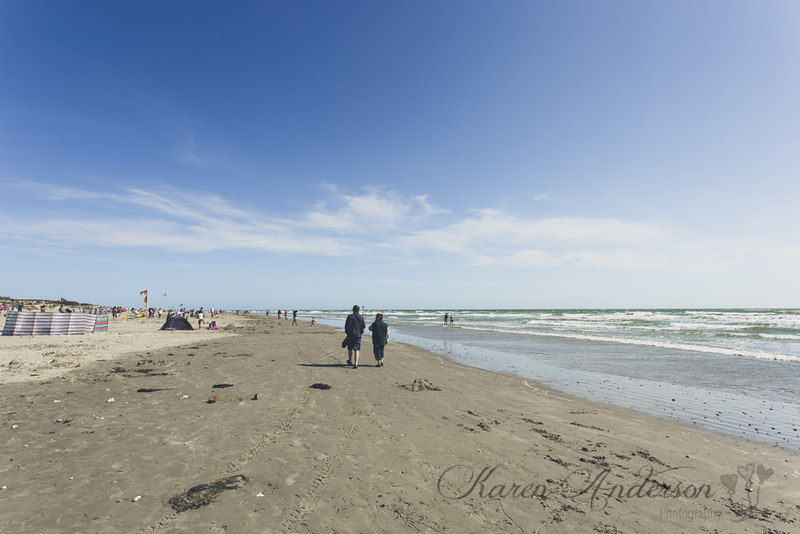 We passed many dogwalkers and people setting up camp beside the groynes with there windbreakers sheltering them from the ever increasing wind. 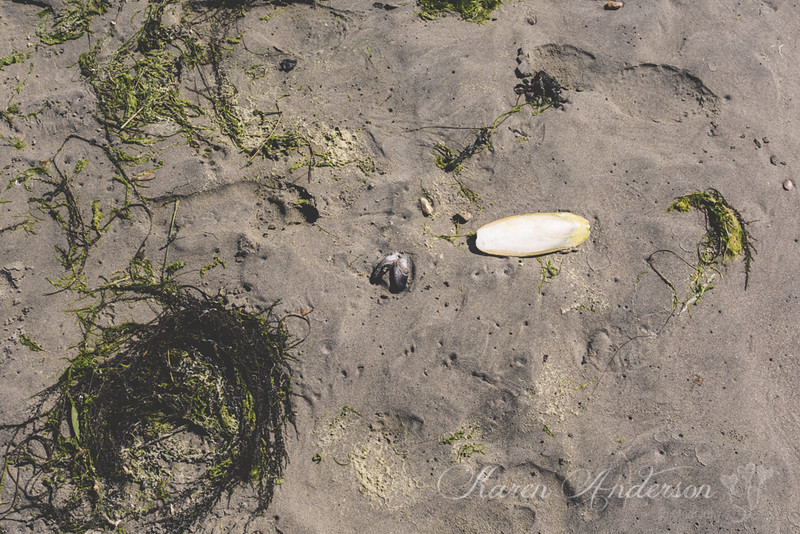 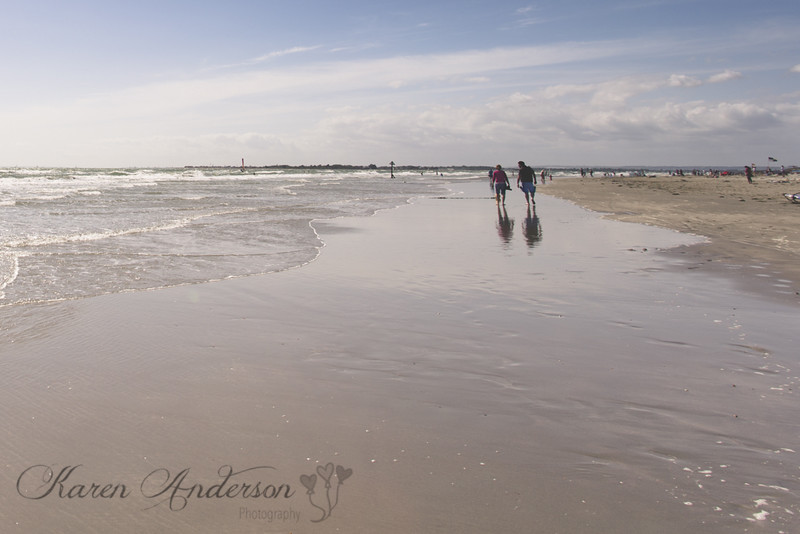 In the distance across the water towering above the other high-rise buildings I recognise Portsmouth’s Spinnaker Tower, I have not been yet, but have seen it in the distance from many places I have visited including from the coast on the Isle of Wight.

The two Witterings, East and West, lie on the coast in the south-western corner of the peninsula – East Wittering a cheerful holiday place and West Wittering a pretty little village that stretches a broad sandy toe towards the Isle of Wight and juts a marshy elbow into the wide waters of Chichester Harbour.

It is not far at all from East to West Wittering and the line between the two is easy to spot as the footpath changes from shingle to the fine sand that produces sculptured soft dunes that alter considerably with the elements.

As such we quickly passed through East Wittering and headed towards the sand, taking our shoes off and walking in the water, feeling the coldness between or toes. We walked across the wide, sunny stretch of beach. People are everywhere – sitting on the sand, erecting windbreaks, riding bikes, building sand castles, running down to the water, paddling, swimming, surfing, kite surfing and flying kites from the shore. It is a beautiful day, I could not help thinking that this will be a wonderful place to come later in the year with less people around to take photos as it is so pretty. 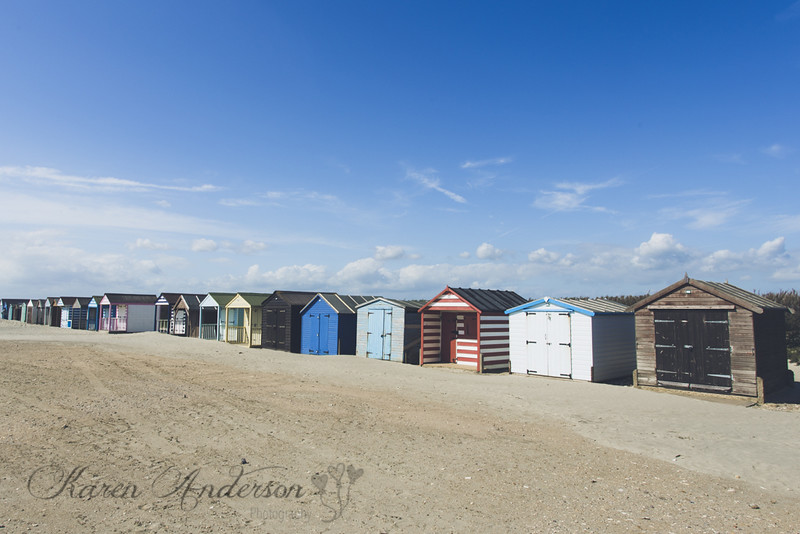 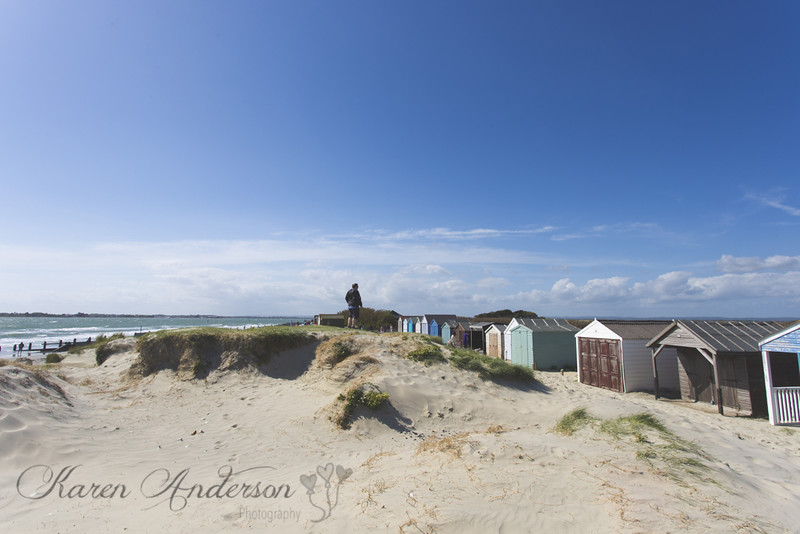 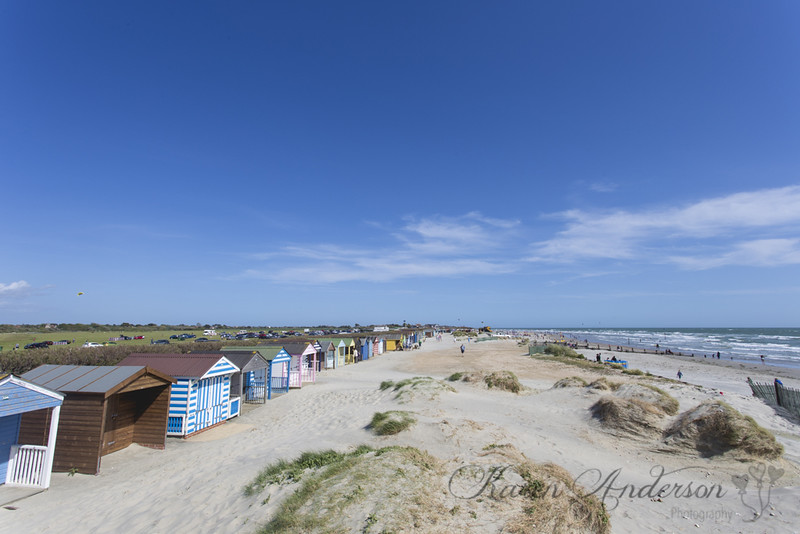 This beach seems to go on for ever, just beautiful. We walked up past the Beach huts to find a large car park near by and stopped briefly for an ice cream to cool us down before heading on. So many people are arriving and leaving. Barbeques are being lit. Picnics are in progress. A group of friends are obviously celebrating someones 30th birthday (because of the banner held high), sitting near their cars, guitars in hand singing, drinking and laughing, just enjoying themselves. 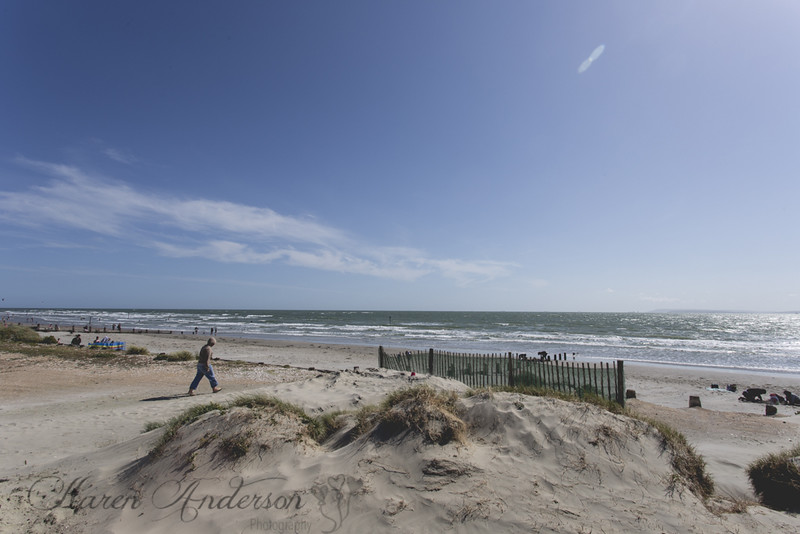 This area was saved from commercial development by local residents who formed a company and purchased the land. In late 1951 it became known that the Church Commissioners were in discussion with either Billy Butlin or the National Union of Mineworkers with a view to establishing a holiday complex at West Wittering. The Commissioners then owned the foreshore and nearby coastal farming land. To avoid losing the wonderful local landscape 126 residents subscribed to a new company and the West Wittering Estate Limited was born. In July 1952, the company bought the land for £20,546.14.9d The company’s main objectives was then and remains to this day; ‘the preservation of the beach and waters adjoining the company’s land for the safe and peaceful enjoyment of the public and the preservation of the rural and undeveloped nature of the company’s property and its surroundings’. 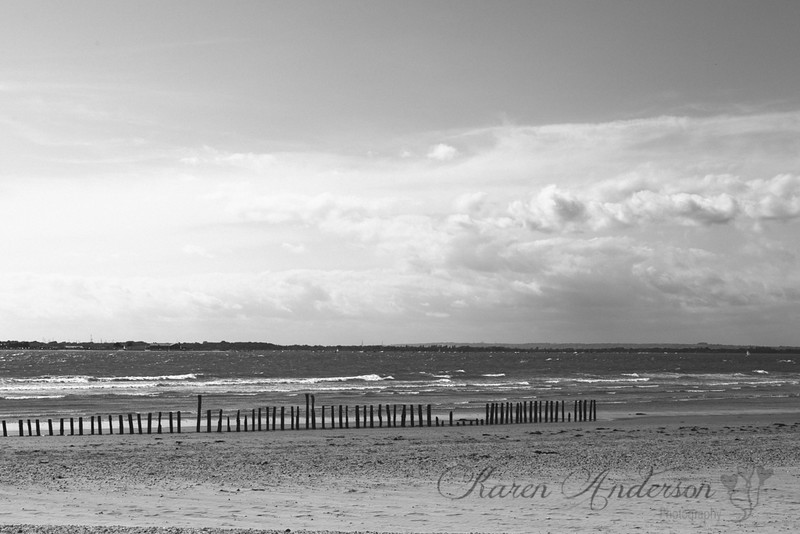 We rounded the great tide-exposed sand flats off West Wittering and turned north along the dunes that make up the club-shaped East Head. Shaggy with marram grass, these sand dunes – a National Trust nature reserve – are constantly shifting under the subtle but unceasing pressure of the wind and tide. 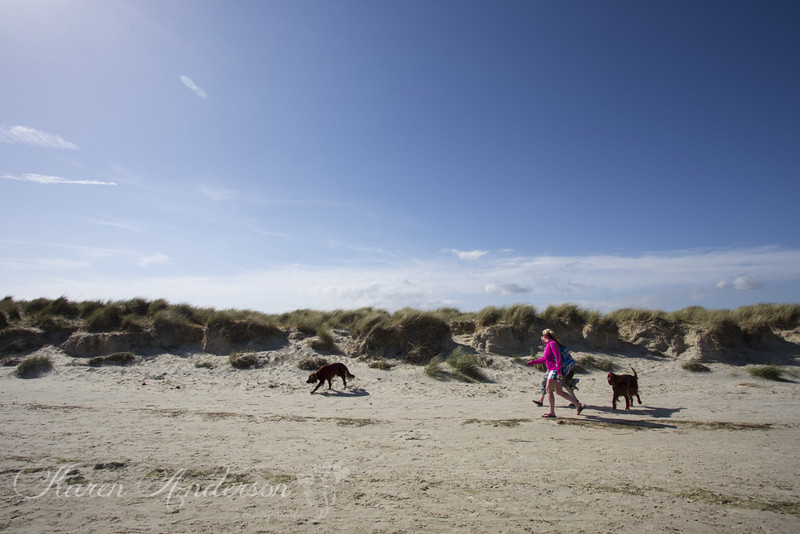 The outer edge of East Head faces Chichester Harbour and forms a beautiful sandy beach. The sheltered inner face of the spit, in contrast, is all dun-coloured marsh and curling creeks. 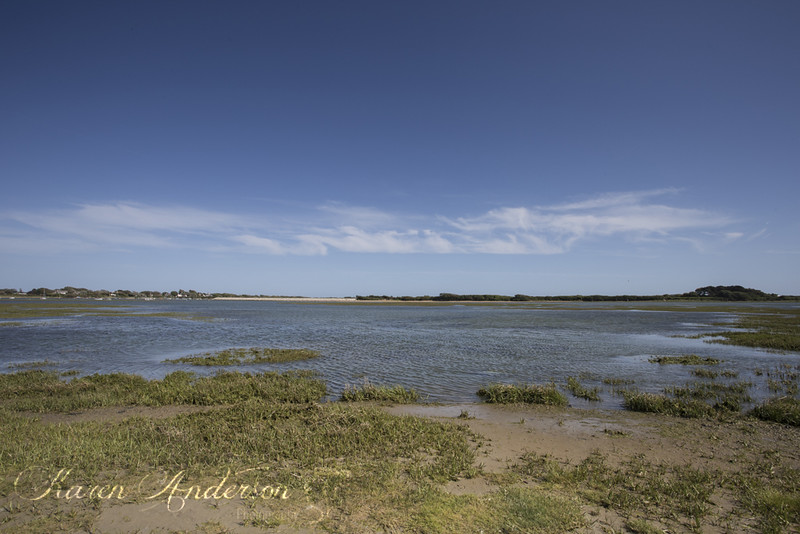 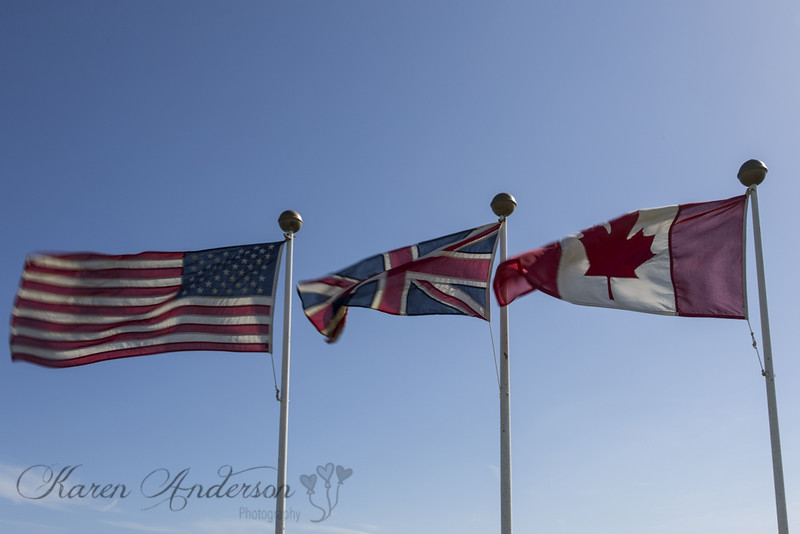 We decide not to walk to the end of the dunes as time was getting on and we still had to head back towards our car, we walked through the car park to see what was here and came across three flags at the entrance, the British Flag, American and Canadian. The two plaques underneath read:

This memorial has been built to mark the 50th anniversary of the ‘D’ Day landings in Normandy on 6th June 1944.

It is dedicated the the Allied Armed who trained in this area and who lost their lives in the liberation of Europe.

We Will remember them.

(on a rectangular plaque on top)

This Memorial is given by The Parish of West Wittering 1995

(underneath on an upside down triangle plaque)

This was quite a timely visit for us being exactly 51 years to the day since the ‘D’ Day Landings! 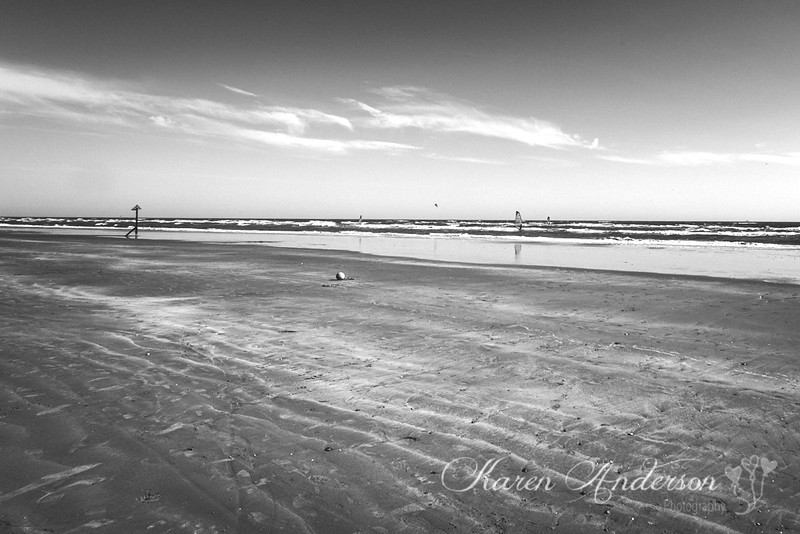 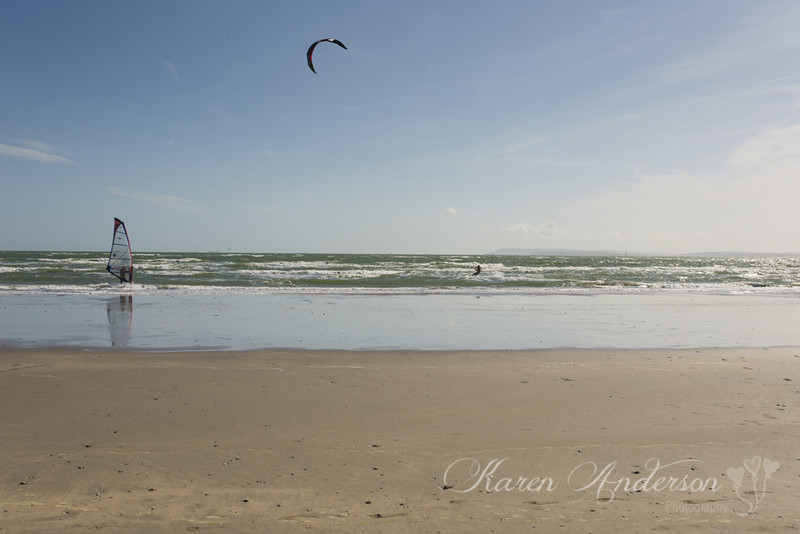 On heading out of West Wittering this time the tide had turned and we could see not just stones at East Wittering, but a large expanse of sand, so we walked as far as we could along the on the sand close to the shore, stepping over the groynes as we passed. 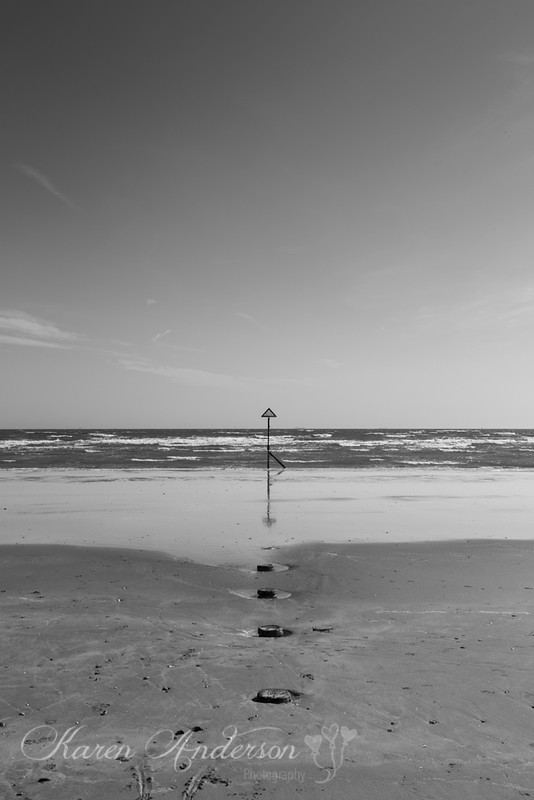 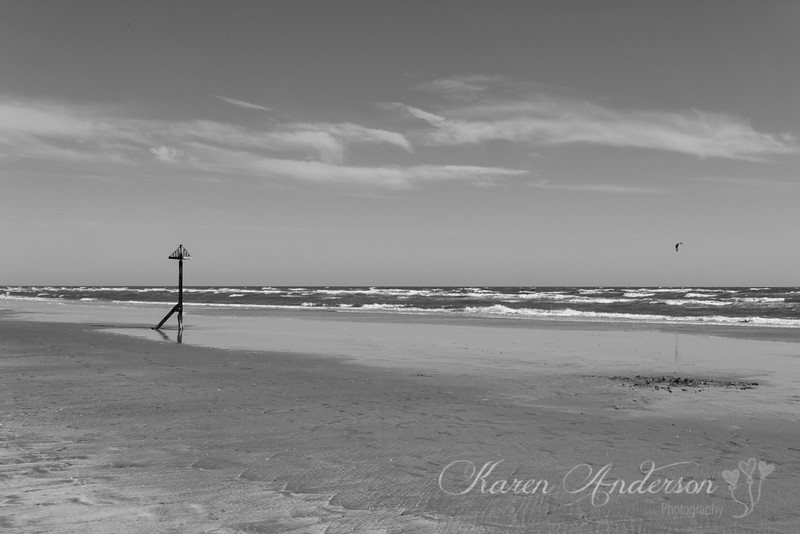 We will definitely be visiting this area again soon, but bringing our children with us. They would love it here, as there is so much to see and do. 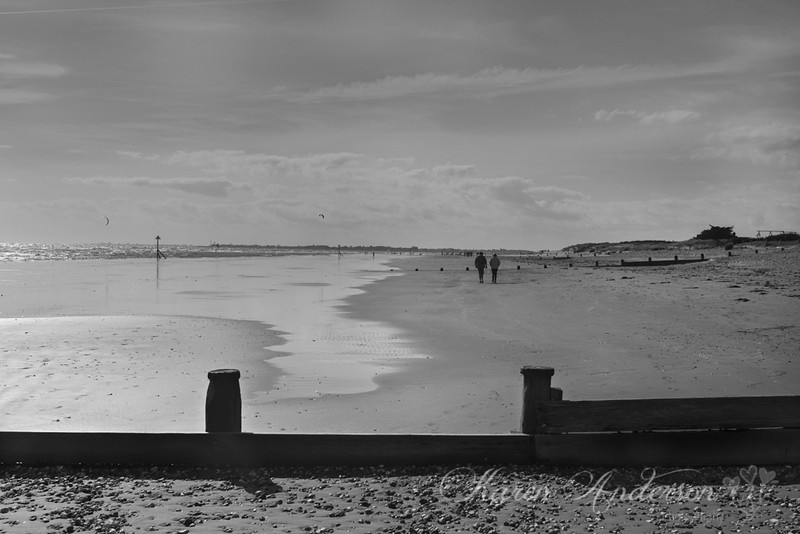 As the colours on the beach were so gorgeous and bold on this day I have also included this post for the Weekly Photo Challenge on the Daily Post where the theme is “vivid”, yes I have converted some to black and white, but lots of the other photos show the wonderful colours along this picturesque section on the West Sussex coastline. 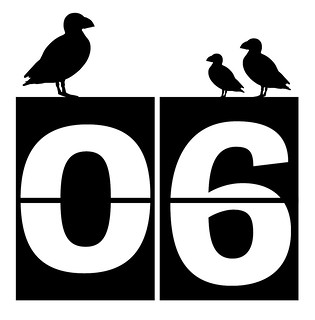 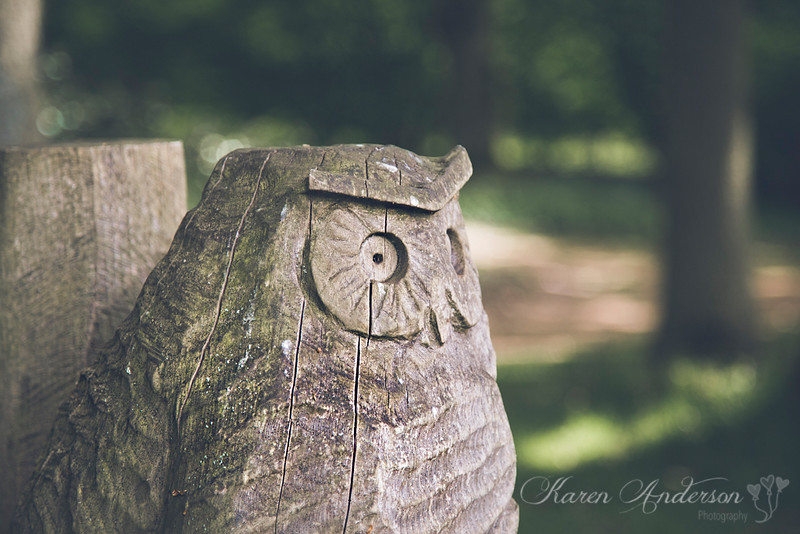 I could not resist taking a photo of this owl carving when I saw it at Winkworth Arboretum as my daughter loves owls. 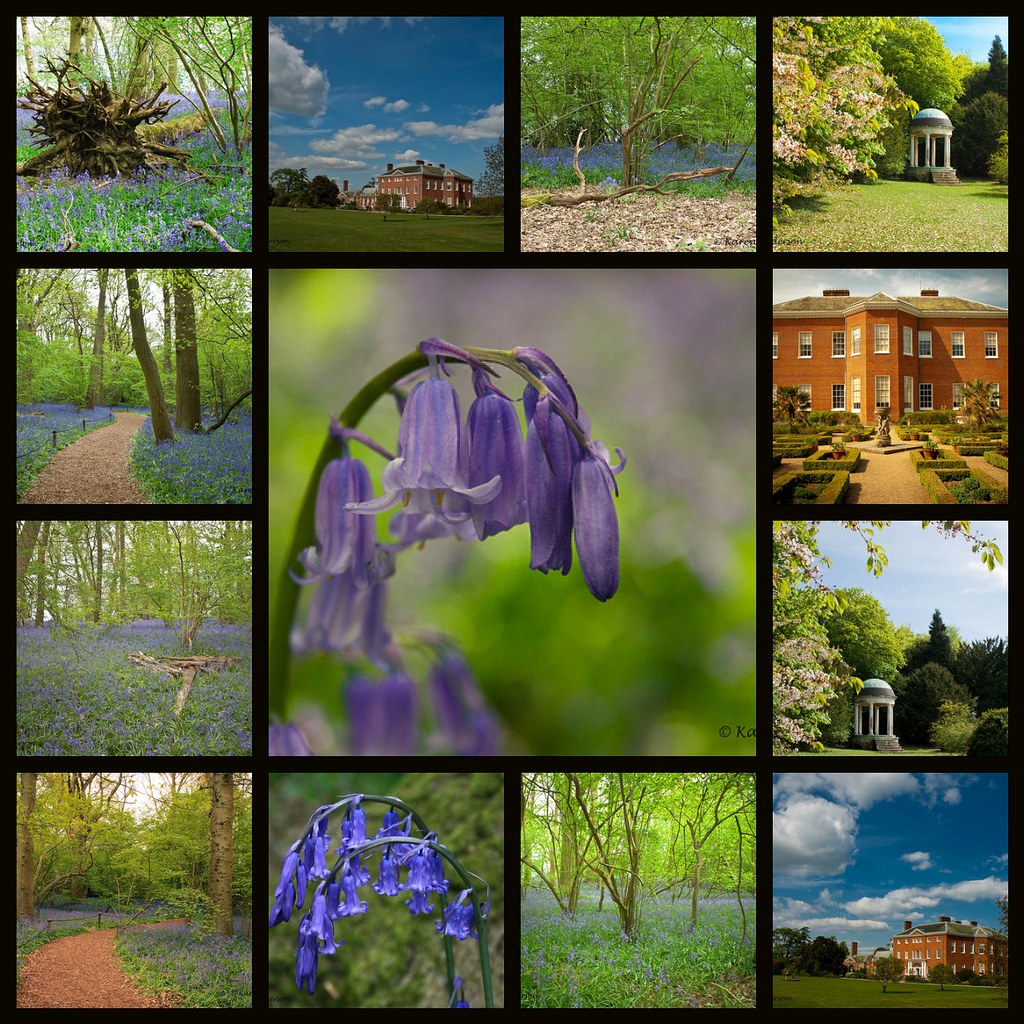 In search of bluebells

Recently a follower mentioned that I should set up a twitter account, prior to this, I brushed off the idea of getting an account because I figured that my life and photography wasn’t interesting enough for it. However, I’m starting to think that it would be a good way of keeping up with what is going on in the photography world and also seeing what other photogs I’m interested in have to say, and, who knows I may actually get something out of it and enjoy myself!?

For those who already have a Twitter account, what do you think, what advice can you give me?

Well I did it, I set up an account, so please come and follow me if you are on twitter too 🙂 While trying to customise my page and searching for pages to follow I stumbled across a challenge that I felt was just up my street. It was on the Wild Life Trust Site, called 30 Days Wild, basically it is a challenge to make room for nature this June – no matter where you are or how busy your life! Make June the month when you do something wild every day. Come and join me in this challenge, sign up and then do a random act of wildness each day in June, add the tag #30dayswild to your posts, come on it will be fun.